Dropshipping is a business model that enables companies to operate without maintaining inventory. Customers place orders online or at a retailer’s store location (showroom). The order is automatically forwarded to the supplier and the goods are shipped to the customer in the retailers’ name.

Dropshipping was a key part of what made Amazon an early industry leader in retail and brands large and small are integrating dropshipping into their omnichannel distribution strategies.

For many retailers, the physical store is a customer service and branding resource while much of the inventory management and delivery is centralized and managed through dropshipping.

Schott NYC, an American clothing manufacturer needed to integrate dropshipping with Neiman Marcus and Nordstrom. Because of the growth in this industry and the technological hurdles that retailers are facing in order to provide secure sales and dropshipping management, the team at Binary Minds was excited to plan and integrate the technology for them.

Deciding on Technology: API vs EDI

Before we started the integration for Schott NYC with Neiman Marcus and Nordstrom, we had to determine the type of data management system for integrating their store with the corporations’ dropshipping technology. While Electronic Data Interchange (EDI) is the traditional method for setting up the communication between retailers and suppliers, we used a newer interchange format (API) to implement the dropship integration with Dsco.

EDI is a data interchange system between suppliers and retailers that predates the internet. While it works well, EDI is expensive to build and takes months to map out each EDI specification.

On top of the mapping development, EDI users must also test the integration method of delivery; whether that be an As2 or SFTP connection. And that needs to be tested for each of the EDI documents involved in every data transaction. This adds time to the onboarding process, especially if there is a third party involved. For every new integration, EDI developers often have to “re-map” for different specs.

Since EDI did not match the specifications for our project, we needed more modern alternatives. Dsco’s API was perfect, especially since it is gaining rapid adoption with major brands and retailers.

Dsco was formed in 2015 to provide a better technology solution for online retailers and dropshippers. Because of the founder’s experience working at multiple supply chain technology companies, Dsco was able to develop a platform that standardizes data exchange.

Why Is Dsco Attractive for Suppliers and Retailers Alike?

In the course of using it, we discovered that the Dsco API (Application Program Interface) is an extremely developer-friendly method of integrating dropshipping. Dsco also has a standard EDI spec that is compatible for all retailers across the platform. In addition, Dsco also supports the “Nordstrom EDI” standard but it is older and limited in functionality. For example, Nordstrom EDI uses UPC numbers. No other item data such as SKU or Title can be sent/received. All good reasons to go with the API which has full access to the entire functionality and is regularly being updated.

To successfully integrate our Schott NYC’s systems with Nordstrom and Neiman Marcus, we followed the steps outlined in the Dsco API documentation and implementation guide.

The API from Dsco allowed us to swiftly set up the data connections with both the suppliers and the retailers. Since Schott NYC’s existing back-end was written in a somewhat exotic programming language (ColdFusion) we could not use the sample code from the documentation but were able to adapt it to Dsco’s language.

After obtaining the API key to connect through HTTP, all methods needed for this project are in place:

With the connector set up, we were able to develop the high-level components specific to Schott NYC. For example:

We ran into a few minor issues with the documentation but these were quickly overcome with the help of the testing tools provided by Dsco.

Testing was incredibly quick and easy! Dsco provides developers with an “onboarding tool” called Gandalf. It does help during the onboarding process but the true value is with testing as it does not require the involvement of another party. Gandalf imitates the production environment. We could create orders and validate all data all before going live. No need to pick up the phone or email other parties to create test orders, validate inventory, etc.

For API developers, this is a dream come true because we didn’t have to wait on other developers or third party vendors. We used Dsco’s tools to get immediate results on our testing.

Some EDI developers have that same kind of flexibility, but many do not. There are some EDI users whose systems only allow them to import/export orders once a day. Meaning that they could make test orders, but would have to wait 24 hours before being able to receive and take action on their side.

Dsco was able to test the system in real-time as much as we needed.

We loved working with this software. It saved us a great deal of time on producing the dropshipping integrations and saved Schott NYC both time and budget. Their support team also made sure everything went well on the executive side.

“What I liked about Dsco support is that they know how to work with developers but also understand my needs. I want to spend my time on the big picture items at Schott NYC and can’t worry about every little detail. Dsco was a good choice. They got us up and running in no time, they were incredibly responsive every step of the way, and their platform is really easy to work with.”

Dsco is an excellent choice of inventory data management if your brand is selecting a B2C/D2C dropshipping platform. It’s popular with many retailers including major outfits like Nordstrom and Neiman Marcus, and integration using the API is easy. Once the system is established, later integrations are even easier. 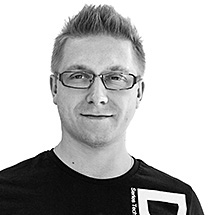 Wojtek Cywicki is a guest contributor for Dsco. In his role as Project Manager and Senior Web Developer at Binary Minds he oversees brand data integrations with major retailers such as Nordstrom and Neiman Marcus. In his free time he is a dedicated musician, counting Pink Floyd as one of his greatest influences. An appearance at a large festival with his band, his own sound studio at home, and his wish to learn the Italian language count among his biggest dreams.